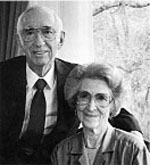 In 1946 he joined the faculty of philosophy at the University of Utah, where he was professor emeritus from 1974 until his passing in 1993. Prominent in intellectual circles, Tanner published several books on the New Testament.

In 1927 in his mother's basement, Obert Tanner began an industrial enterprise that has become the largest firm of its kind in the United States. The O.C. Tanner Company, manufacturing jewelers specializing in corporate recognition awards, forms the material base for the extensive Tanner philanthropies.

As a university professor, Tanner emphasized moral philosophy and the philosophy of religion. He is widely known in academic circles for his passionate advocacy and defense of intellectual freedom. Tanner's heroes are Socrates and Jesus. From the one he took the belief that the unexamined life is not worth living; from the other he learned compassion for human suffering and an unyielding hope for an eventual human felicity. Much of his time and energy have been dedicated to national and international efforts to establish a firm ground for peace and world order. His public service spans several decades of dedicated work extending from the United Nations Organization to his membership on the National Commission on the Bicentennial of the United States Constitution.

In 1988 Obert Tanner received the first Award in the Humanities from Norman H. Bangerter, the Governor of Utah. Also in 1988, he received the National Medal in the Arts from President Ronald Reagan. He was the recipient of several honorary degrees, has been decorated by the Queen of England, and was an Honorary Fellow of the British Academy.